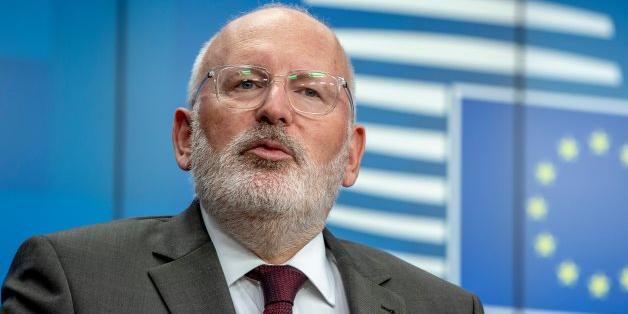 CAIRO – 11 April 2022: Executive Vice President of the European Commission Frans Timmermans said the participation of world leaders in the upcoming UN Climate Change Conference 2022 (UNFCCC) COP27, set for Sharm el-Sheikh in November is a key opportunity for bringing forth and carrying out new ideas toward enhancing new and renewable energy sources usage.

During a meeting Monday with a number of reporters on the sidelines of his current visit to Egypt, the European official highlighted the importance of President Abdel Fattah El Sisi's phone call Sunday with President of the European Commission Ursula Von der Leyen as part of ongoing coordination in this regard.

Egypt is an ideal partner for developing floated ideas concerning the use of new and renewable energy and hydrogen sources, especially in light of its strategic location in the Mediterranean and the African Continent, he said.

Timmermans, who held talks during his visit to Egypt with a number of ministers and senior officials, voiced appreciation of Egyptian efforts in preparation for hosting COP27.

The two sides are currently mulling plans to further promote cooperation, he said, adding that Egypt, with its giant natural resources, could produce energy that far surpasses its needs, thus export surplus to Europe.

He pointed out to his talks Sunday with Foreign Minister and President-Designate of the Upcoming UNFCCC COP27 Sameh Shoukry, as they discussed preparations for the gathering, mechanisms of implementing the European Green Deal and supporting the climate transformation process in Africa.

The European Union anew stressed its keenness on bolstering cooperation with Egypt in the fields of liquified gas and supplies of green hydrogen and develop the Mediterranean Green Hydrogen Partnership.

He stressed the European Union's keenness to help Egypt overcome the crisis of shortages and high prices of grains, especially wheat, resulting from the Russian- Ukraine war. Therefore, the EU offered a grant of 100 million euros to help Egypt obtain its grain imports.

Timmermans said that the European Union seeks to replace Russian gas with other energy resources, and that Egypt can play a key role in this process.

He noted that Egypt can contribute with its exports and production of liquefied natural gas, along with its ability to transport gas from the countries of the region to Europe.

Minister of Foreign Affairs Sameh Shokry, president-designate of COP 27, received Sunday Executive Vice-president of the European Union Commission for the Green Deal Frans Timmermans, within a series of meetings with parties involved in climate change work, as part of Egypt's preparations for the summit it is hosting in Sharm El Sheikh next November.

In an article published by Al Ahram Center for Political and Strategic Studies (ACPSS) on Thursday, Minister Shoukry said Egypt will employ its regional and international weight as well as its diplomatic capabilities to encourage countries to reach tangible outcome that could contribute to reducing carbon emissions, adapting to climate change effects, and providing the necessary funding for developing countries.

Shoukry added that Egypt would spare no effort to encourage all countries to take concrete and practical action to address climate change.

The top Egyptian diplomat explained that the climate change's issue tops the world's challenges after scientific evidence showed that human activity since the industrial revolution has been and is still causing severe damage to all countries and societies.

Shoukry stressed the need for urgent action by all countries to cut carbon emissions caused by this growing industrial activity.

He indicated that Egypt's presidency of the COP27 comes at a time when the world economy is still recovering from the coronavirus' repercussions, along with the current geopolitical tensions that badly affect world economies.