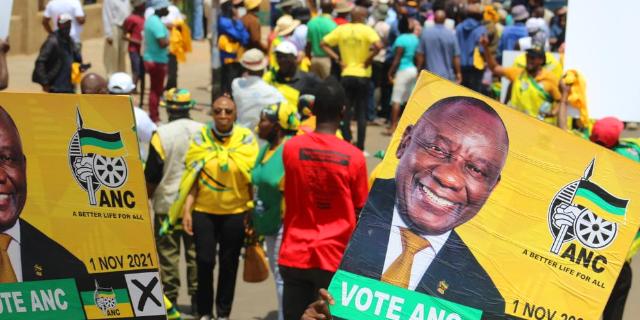 A draft policy document compiled by South Africa’s governing party suggests the private sector play a greater role in the economy, a proposition that’s favoured by President Cyril Ramaphosa and provides further evidence of a shift in thinking in an organization that’s traditionally backed by state-led growth.

The African National Congress document, seen by Bloomberg, recommends that private companies invest in infrastructure and take over state-owned firms. It also envisions businesses and individuals donating land to kickstart a program to improve access for Black farmers.

Efforts to revive an economy have foundered in the wake of the Covid-19 pandemic and nine years of misrule under Ramaphosa’s predecessor, Jacob Zuma, during which the government estimates more than R500 billion ($32 billion) was stolen – mainly from state companies.

Many of the firms are now dependent on government bailouts and the country’s ailing power utility, Eskom Holdings SOC Ltd., has subjected the country to an increasing number of electricity outages, known locally as load-shedding.

The government has faced criticism for displaying inertia in addressing the energy shortages and clearing bureaucratic hurdles to investment. In February Ramaphosa called for a more conducive environment for business to create jobs.

The ANC has an alliance with the South African Communist Party and retains strong ties with Russia and Cuba, and it previously adopted proposals to establish a state bank, nationalize the central bank and make it easier to seize land without compensation.

“Programs to unlock wider access to land ownership have not been effective or sufficiently ambitious in scale,” the ANC said in the document dated April. “The mobilization of investment in new productive capacity has been inadequate and in the past 15 years has been severely constrained by load-shedding due to the shortage of electricity. All this has been further worsened by the Covid-19 pandemic.”

Pule Mabe, a spokesman for the ANC, didn’t respond to requests for comment. The document’s preparation comes ahead of the party’s policy conference, which will take place later this year.

A key plank of the party’s draft recommendations is that the Land Reform and Agricultural Development Agency proposed by the government facilitate land donations and reward those companies with recognition for boosting Black participation in the economy, a requirement to do business with the state.

Other proposals in the document entitled ‘Strengthening Economic Recovery and Reconstruction Towards an Inclusive Economy’ include: