Nigeria : Amid pressure on naira, experts proffer options to shore up forex 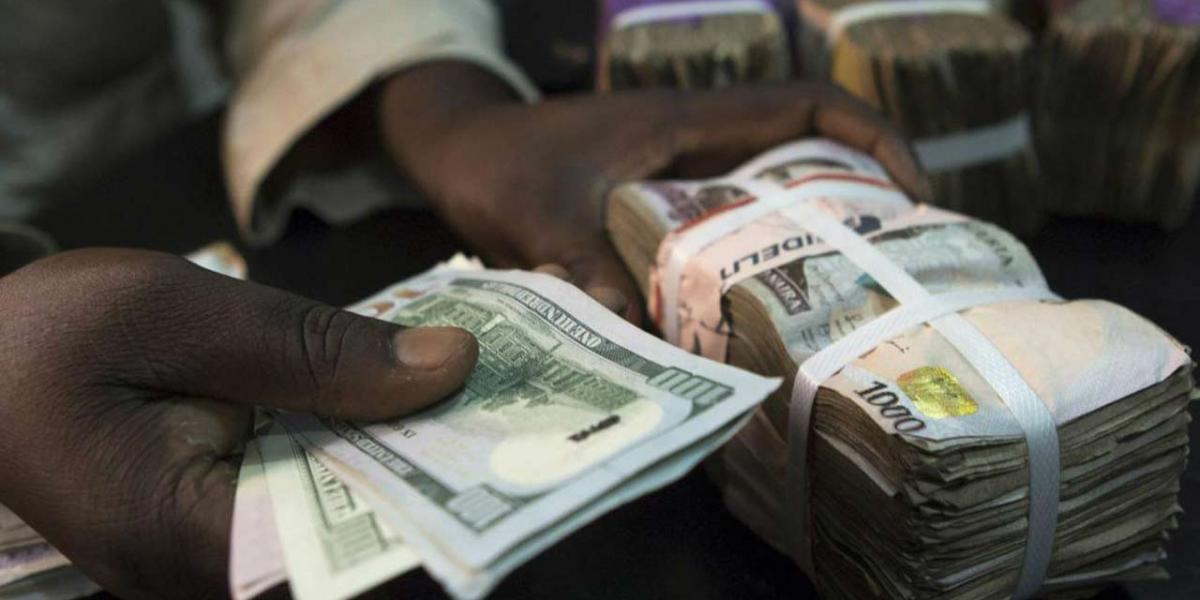 Analyses and expert opinions suggest that the monetary authority may have exhausted its tools as the economy battles unending fiscal drawbacks.

In the investment market, there are fears that the fiscal frameworks would become even weaker in the coming months as political activities and tension increase. Also, the market faces renewed pressure from foreign investors who will be repatriating their dividend proceeds in the coming months.

The rising political unease, experts have noted, has already sent a strong signal to international investors, who are already pulling out a remnant of foreign funds in the economy.

The situation is worsened by the array of decisions hiking interest rates in western economies, which Olarenwaju Abimbola, an investment expert and economist, said have made developed countries more attractive than risky markets, such as Nigeria.

The U.S. Federal Reserve, for the first time since 2018, increased the benchmark interest rate by 25 basis points following an earlier indication that the rate could go up by at least thrice this year as part of its monetary normalisation. The Fed’s key interest rate was at roughly 1.5 per cent before the raise.

The monetary policy committee of the Bank of England (BOE) had also raised interest rates from 0.5 per cent to 0.75 per cent recently as part of efforts to combat the escalating cost of living. That was the third interest rate hike by the BOE in four months, taking the rates to their highest level since the beginning of COVID-19.

South Korea, New Zealand, Brazil, Russia, South Africa and many others have ramped up their lending rates since last year to rein in threatening inflation rate. The World Bank, the International Monetary Fund (IMF) and some other research institutions had warned developing countries to brace up for a massive capital flight and advised countries with weak fiscal positions to consider an interest rate hike.

At the last month’s Monetary Policy Committee (MPC) meeting, the policy rate hike option was rejected as six out of 10 members voted against it. That left the country’s Monetary Policy Rate (MPR) at 11.5 per cent, the level it was since September 2020.

While Nigeria’s interest is still far higher than some other countries, Abimbola, chief executive of Towers Securities Limited, said Nigeria’s capacity to retain capital is extremely complicated and that the interest rate is just one of them.

He said Nigerians will, for instance, suffer outflows of foreign portfolio investors in the coming months as the local market does not currently provide sufficient incentives to counter the increasingly attractive U.S. and other market rates.

As argued by Abimbola, Nigeria’s equity market is still unattractive. For the first time in decades, a transaction in excess of N100 million in the capital market is now being subjected to a capital gain tax of 10 per cent, in addition to the existing 10 per cent withholding tax on dividends.

“The challenge now is that we want to make money from those who are also looking for money. Capital importation has gone down drastically. The US, UK and other western countries have become more attractive. The message to investors is that they can keep their money at home and earn little interest in it. Though the return on the fund is still higher in Nigeria, the risk element is the challenge. Capital repatriation is a challenge. What is the essence of investing in a market, in which you cannot easily repatriate funds?” Abimbola asked.

Investors have reportedly resorted to the parallel market to source foreign exchange (forex), as the official segment consistently lacks sufficient liquidity to meet their needs. Experts partly blame the exit of foreigners from the Nigerian market on their inability to repatriate their fund, which was estimated at $5 billion.

Whereas the current amount of money trapped in the market is unknown, Vice Chairman, Highcap Securities Limited, David Adonri, said it could be equal or higher than what it was last year, since the FX crisis has not abated. He added that the challenge depresses foreign investment generally as Foreign Direct Investment (FDI) holders equally face enough challenges repatriating their hard earned profits.

Also, foreign investors who earn dividends in naira have resorted to person-to-person (P2P), otherwise known as black market, to buy dollars for repatriation. Sadly, most of them bring in their funds through the Nigerian Autonomous Foreign Exchange (NAFEX) segment where they buy naira at a ‘discount.’

Mid-last week, the NAFEX or Investors’ and Exporters’ I &E window exchange rate maintained N416.22/$ while the black market rate was between N587/$ and N592/$, putting the effective market arbitrage at about N173/$, which was about the highest recorded in the forex market. The last time the market witnessed such a wide differential was 2017 when the black market almost touched N500/$, while the official price remained at N362/$.

The tension eased slightly at the weekend but analysts said FX remains a sellers’ market in the coming months, with some projecting that it could break the N600/& resistance in a matter of weeks.

Like every other time in history, market players, including banks and government officials, have continued round tripping and other market manipulations to take advantage of the wide differential. The wider the arbitrage, Victor Ogiemwonyi, an economist, noted, the more intense the manipulation of the market.

Thus, some economists have called on the Central Bank of Nigeria (CBN) to liberalise the market, as a necessary option for achieving a dynamic equilibrium as opposed to that static disequilibrium that pervades the current arrangement.

For one, Dr. Ayo Teriba of Economic Associates, said nothing short of full convergence would help to achieve the desired equilibrium, while Adonri, who was quoted earlier, said the forex market should operate like a commodity market where every operator buys and sells currencies at market price.

But speaking at a seminar for finance correspondents and business editors at the weekend, Chief Executive Officer of Global Analytics Consulting, Ayo Fasua, said an import-dependent country like Nigeria cannot cope with a fully-liberalised forex.

The economist argued that no market or economy in any part of the world runs on autopilot, adding that no country allows its currency, which is the pride of the citizens to be debauched to a point when it becomes worthless.

“If we free the naira, it could get to a point of no return. It will get to a point when the CBN governor will begin to stammer because he won’t know what to do anymore. Every country controls the value of its currency,” he said.

APART from the fiscal downside of the falling naira, the foreign reserves have continued a downward slope, a trend formed towards the end of last year after it failed to sustain a momentary recovery witnessed in October.

The gross figure, which has remained a consistent gradual depletion in the past five months, dropped to $39.55 billion at the end of last week. Year-to-date (YTD), the external reserves shed approximately 99 million.

The amount can conveniently cover six-month imports, assuming there is no disproportionate increase in last year’s figure. Last year’s total imports were N20.84 trillion. But there are fears that import bills could jump this year owing to political demands. The reserves, also, are sloping down with nothing in the chart to show the floor. And with capital importation facing headwinds, they could fall much lower than they currently are.

The Guardian, recently, reported that the reserves closed last year with an estimated value of $40.52 billion last year. They suffered a wobbling performance last year, tumbling below $34 billion at some point.

A breather, however, came with $3.35 billion International Monetary Fund (IMF)’s Special Drawing Rights (SDR) and Eurobond issuance. Windfalls from the two sources provided the needed buffer and pushed up the reserves above the magical N40 billion market.

But the move was short-lived. The gross figure had hit $41.8 billion and hovered around that region before a fresh crisis set in.

A financial expert, David Adonri, said it was obvious the country could not sustain the momentary recovery as there was a FX hole waiting to swallow the earnings.

Earlier in the year, Bismarck Rewane, the chief executive officer of Financial Derivative Company Limited, projected that the reserves would nosedive to about $32 billion as the monetary authority would require between $8 billion and $10 billion to defend the naira.

MEANWHILE, Nigerians across strata are taking their fate into their hands. While the middle-class are converting their savings to dollar assets, young people are exploring opportunities in blockchain technology to preserve their earnings.

Hence, the adoption rate of cryptocurrency has ballooned with the IMF admitting that Nigerians and citizens of other countries with volatile exchange rates are fast embracing the digital currency culture to hedge against inflation.

As the government inadvertently continues to inflate away part of their future financial obligation, including naira-denominated debts, there are concerns that the country could be entering an ‘original sin’ regime, a concept in international finance where a country is restricted to obtaining only foreign-denominated loans.

Until two years ago, Nigerian bonds were fairly attractive to foreigners, but in the second quarter of 2020, foreigners started distancing themselves from the country’s debt instruments as FX illiquidity bites hard. The declining foreign interest in naira’s debt instrument reflects in the depressed foreign portfolio investment.

Last year, the figure dropped by 34 per cent to $3.39 billion compared to $5.16 billion recorded in the previous year. Last year’s figure was the lowest in five years.

Interestingly, it had in 2020 declined by 68.5 per cent from $16.38 billion recorded in 2019. Financial analysts said this year would be worse as foreigners are increasingly aware of the country’s inability to tame inflation, which has a huge impact on investment.

An investment consultant who is privy to the reaction of the market but unwilling to be identified told The Guardian that the number of high networth Nigerians who are also moving their capital assets abroad have increased since the beginning of the year. The source warned that the situation would be worse in the coming months if political tension increases.

“I am more worried about Nigerians who are moving their funds abroad. That has been a challenge but the number has increased since the beginning of the year. While a lot of people have lost confidence in the economy, others are scared of the impacts of political upheavals on the performance of local businesses, and you cannot fault them because we have seen it happen over and over. We are, perhaps, poor at managing political transitions,” the expert said.

Chief Executive of Parthian Partners, Oluseye Olusoga, had previously done an analysis on historical data of the Nigerian capital market and concluded that pre-election years witnessed massive exodus of capital. Olusoga concluded that despite the huge opportunities in the Nigerian market, the forthcoming election causes foreign investors to be too cautious to keep their money.