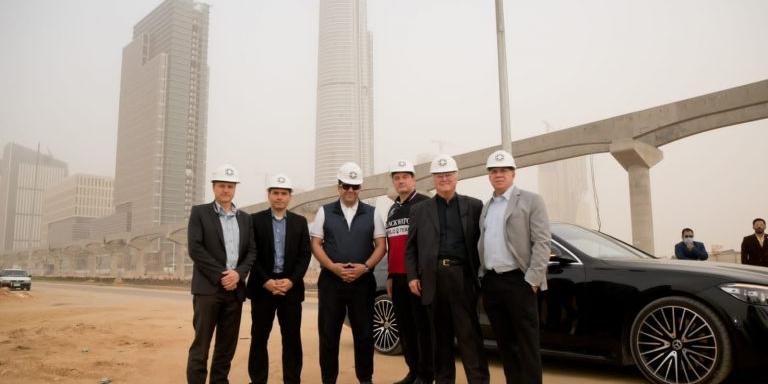 The visit comes as a prelude to the first project being designed by Adrian Smith and Gordon Gill in the New Capital.

Adrian Smith, partner and co-founder of Adrian Smith + Gordon Gill Architecture, praised the scale of construction and achievements in the New Administrative Capital, noting that Egypt captivated the world with its forward-thinking approach and extensive knowledge, which has left a strong impression on its people over the years.  He added that these mega projects play a major role in shaping the future of the Capital to be more people-centric adopting the highest standards of sustainability. He noted that goals’ seeking carbon neutrality are critical today.

Over the last few years, Egypt has successfully succeeded in designing and developing an urban Capital that serves the needs of the community, ranging from residential neighborhoods to educational, religious institutions and medical facilities, in addition to having the largest park in the world. The urban designs are unique in their modern outlook, maintaining the rich cultural heritage of Egypt at the same time. The New Administrative Capital provides all the necessary services, hence offering a model for future cities, added Adrian Smith.

Maged Marie said that the real estate sector continues to play a vital role and a major driver of the non-oil economy in the region, coinciding with the worldwide focus on achieving the goals of carbon neutrality. Magnom Properties will look for effective solutions to the changeable investment climate and he is confident that the expertise of Adrian Smith + Gordon Gill Architecture, will contribute and support these goals.

He also stated that the designs by these architects have advanced tremendous development over the years to become more diversified and sustainable. They deploy the latest technologies, using environmentally friendly materials and adopting energy efficiency practices, which are key elements that will assist in foreseeing a more sustainable future for coming generations.

Maged Marie added that Adrian Smith is one of the world’s most reputed architects that we have seen in our era, as he has designed world class projects, led by Burj Khalifa in the United Arab Emirates, and the Jeddah Tower project in Saudi Arabia, which is expected to break the world record of being the tallest manmade structure in the world. He continues to deploy environmentally friendly and energy-saving principles in all projects.

He further commented that Gordon Gill, through Adrian Smith + Gordon Gill Architecture, designed the Al Wasl Plaza Dome, which is synonymous to the identity of Expo 2020 Dubai and the soul of its legacy, District 2020. Al Wasl is the historical name for Dubai, meaning ‘connection’ in Arabic. AS+GG won the contract for the project after competing with the biggest international companies in the construction industry.

Notably, Prime Minister Mostafa Madbouli held on Wednesday a meeting with Smith along with his Company officials, and officials of one of the companies that will implement a giant tower in the New Administrative Capital, designed by Smith.

During the meeting, Smith reviewed the previous works of his architectural firm.

Smith also pointed to his company’s interest in adopting smart, energy-saving, and carbon-neutral architectural designs, consistent with sustainable development standards, an approach he called “Global Environmental Context”, which relies on the design of buildings and the creation of structures that reduce the negative impact on the environment. The company’s officials also presented a project to build a giant tower in the new administrative capital, as a joint investment between an Egyptian and a Saudi company, so that it would be built in accordance with sustainable environmental standards.

Smith said that the establishment of such a building in Egypt will represent an extension of the historical Egyptian excellence in the field of architecture since the era of the Pharaohs. For his part, the Prime Minister welcomed the proposed project.

During their current visit to Egypt, Smith and Gill also visited the pyramids and the Sphinx accompanied by the Renowned Egyptologist Zahi Hawas, Lamia Kamel assistant Minister of Tourism and Antiquities for promotion and members from the ministry and the ETA