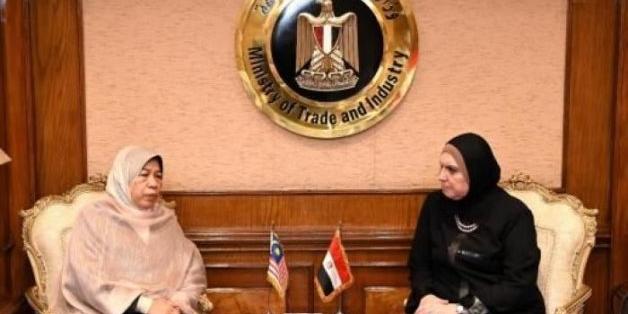 CAIRO - 18 April 2022: Egypt’s exports to Malaysia hiked 35 percent during 2021, amounting to about $126.7 million, compared to about $94 million in 2020, according to the Minister of trade and Industry Nevine Gamea.
Gamea elaborated that the most important items of exports include citrus, phosphates, chemical and mineral fertilizers and fruits.
The minister added that Malaysian investments in Egypt amount to $60 million in 26 projects in the oil, gas, electricity, construction, contracting, trade, tourism and information technology sectors, pointing out that Egyptian investments in Malaysia have reached $20 million in the chemical and wood industries sector.
This came during Gamea’s expanded session of talks with the Malaysian Minister of Plantation Industries and Commodities (MPIC) Zuraida Kamaruddin, and her accompanying delegation, which dealt with a review of aspects of industrial, investment and commercial cooperation between the two countries and a number of economic files of common interest.
The minister said that the meeting dealt with ways to enhance joint cooperation between the two countries in the field of Malaysian palm oil production in Egypt and export to regional and continental markets.
She explained that the coming period will witness more coordination between the Egyptian Commercial Office in the Malaysian capital, Kuala Lumpur, and the Malaysian Palm Oil Council to start actual steps to establish joint Egyptian-Malaysian projects in the field of palm oil derivatives production and to benefit from the distinguished investment components in the Egyptian market, as well as the great Malaysian expertise and capabilities in this field.
Gamea explained that the Egyptian market currently possesses all the elements that attract investment, which include the appropriate investment and legislative environment, and the infrastructure necessary to establish projects as well as the establishment of the economic zone of the Suez Canal, noting that Egypt is heading during the current stage to establish tire factories, which can rely on Malaysian rubber through Importing it to the Egyptian market and manufacturing it with an Egyptian-Malaysian partnership in order to meet the needs of the local market and export.
The minister said that the meeting also dealt with ways to enhance cooperation between the two countries in the field of timber to meet the needs of the Egyptian industry of timber, especially since Egypt has a sophisticated furniture industry that matches international standards and has great competitive advantages that qualify it to meet local needs and compete in foreign markets.
She pointed out that the Malaysian business community can benefit from the advantages of investing in the Egyptian market, which include free and preferential trade agreements concluded with a large number of countries and international economic blocs, especially the Mercosur and COMESA agreements, the African continental free trade and benefiting from the available customs exemptions, within the framework of those agreements, by working to localize Malaysian industries in Egypt and export to foreign markets, benefiting from the Egyptian market as a strong window for exporting to the markets of neighboring countries and international markets.
For her part, Malaysian Minister of Plantation Industries and Commodities (MPIC) Zuraida Kamaruddin affirmed her country's keenness to deepen bilateral cooperation frameworks with Egypt, especially at the investment, industrial and commercial levels. This is in light of the clear development in the investment and business climate in Egypt, as well as the major national projects adopted by the Egyptian state during the current stage.
Kamaruddin explained that the MPIC is specialized in six main productive sectors, including palm oil, rubber, wood, paper, cocoa and textile fibers, noting that Egypt imports a number of these products from the Malaysian market, which are included in the fields of food industries, tire industry, construction and infrastructure sectors.
She expressed her country's aspiration to establish a factory for the production of palm oil derivatives in Egypt and to export to regional and continental markets, in particular to the markets of African countries, especially since Egypt represents a major gateway to those markets, noting the importance of activating joint efforts to enhance trade and investment cooperation between the two countries through the establishment of more Malaysian investment projects in the Egyptian market, which depend on Malaysian production inputs and export to global markets.
Kamaruddin  invited the Egyptian business community to participate in the activities of the International Agricultural Commodities Exhibition, which will be held in the Malaysian capital, Kuala Lumpur, from 26 to 28 July.
The exhibition represents an excellent opportunity to hold business meetings between investors from the two countries and to explore the available trade and investment opportunities in a way that contributes to enhancing the rates of trade exchange and joint investments between Egypt and Malaysia during the next stage, she explained.