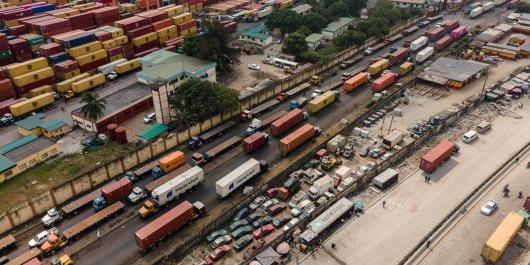 The Tin Can Island Command of the Nigeria Customs Service (NCS) has facilitated about 71,014.4 Metric Tonnes of export cargoes with a total Free on Board (FOB) value of N56,205 billion between January and March 2022.  The Customs Area Controller of the Command, Comptroller Adekunle Oloyede who disclosed this while reviewing the command’s operations in the first quarter of 2022, said the commodities exported through the command include copper ingots, stainless steel ingots, sesame seeds, cashew nuts, cocoa beans, rubber, cocoa butter, leather, ginger and frozen shrimps, among others.

The FOB Value in Naira of the above-mentioned tonnage also increased from N31.371 billion to N56.205 billion representing an increase of 55.82 per cent within the period under review,” he added.  However, he said the command generated N135.443 billion in the first quarter of 2022, which is an improvement of N22.747 billion, translating to a 20.18 per cent increase from the first quarter of 2021 collection of N112.695b.

According to him, the machetes were seized due to security issues in the country and there was no End Users Certificate from the office of the National Security Adviser for the importation of such items. He added that the import of the products contravenes Sections 46, 47 and 161 of the Customs and Excise Management Act (CEMA) Cap 45 LFN 2004.

The command also seized 145 kilograms of Colorado, 640 bales of used clothes, 236,500 pieces of used shoes, and 62,500 pieces of new lady’s shoes.  Others are: 1,670,400 pieces of Chloroquine injections (Smg/Sml), 1,814,400 pieces Novalgen injection (500mg/Sml), 48,850 rolls of cigarettes and 23,800 tins of sodium bromate and baking powder. According to him, the Colorado was concealed in two units of Ridgeline trucks and two units of Toyota Corolla vehicles while the machetes made in Ghana were concealed in eight containers.