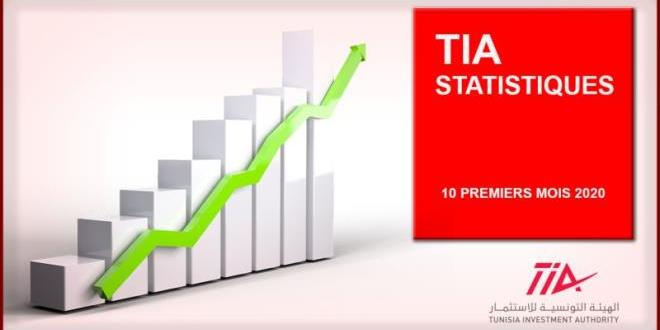 The number of reported projects reached 45 during the first 10 months of 2020, representing an overall investment of 1,911 million dinars (MD), i.e. a 62% increase, according to the Tunisian Investment Authority (TIA).

The cumulative investment until October 31, 2020 recorded a slight decrease of 3% compared to the same period in 2019. This decline is explained by the report of a cement plant project for a substantial investment cost of 650 MD in October 2019, the same source adds.

Excluding this investment operation, investments edged up 44% up to October 2020.

With regard to the breakdown of the 45 investment projects reported by sector, the industry sector is in the lead in terms of investment with 26 projects with a cost of 928 MD allowing the creation of 9,510 jobs, followed by the renewable energy sector with 9 projects worth 471 MD and 70 scheduled jobs.

According to the TIA, the materialisation of projects in the renewable energy sector in the allowed time would, on the one hand, accelerate Tunisia's energy transition plan for 2030, and encourage the development of larger scale projects by attracting new investments, on the other hand.

The service sector ranks second with 7 projects worth 235 MD, helping create 2,107 jobs. In the tourism sector 3 projects were reported at a cost of 277 MD and 1,072 scheduled jobs.

//Breakdown of reported projects according to investment regime //

"These figures show that the exporting activities are still playing an inportant role in job creation."

Besides, out of the investment projects reported to the TIA, during the first 10 months of 2020, 30 projects include a foreign participation for an investment cost of 1,414 MD, i.e. 74% of the declared investments, generating 10,663 jobs.

According to the TIA, the statistics relative to the breakdown of foreign participation by country, consecrate the position of Tunisia's strategic partners as providers of foreign direct investment.