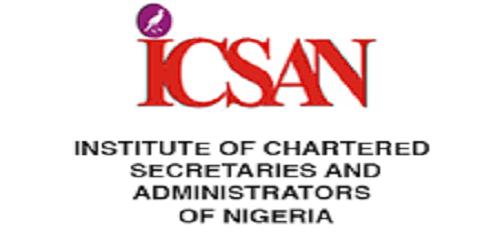 The Institute of Chartered Secretaries & Administrators of Nigeria, ICSAN, has described the controversy over who is authorized to collect Value- Added Tax (VAT) between the federal government of Nigeria and States in the federation as unnecessary.

The president/chairman of Council of the institute, Taiwo Owokalade at a media brief in Lagos, said there is no need heating the polity over VAT urging the federal and State governments to look inward to see how they can give meaning to citizens by maximizing human, material and natural deposits.

Owokalade said: “The governments across levels must strive to build their human and natural resources toward engendering self-reliance and more economic viability.”

He said the act of depending on federal allocation for survival by federating states will hamper industrial, enterprising and resourceful spirit of the people and encourage laziness. Let every State develop its potential.

According to him, it’s needless for FIRS to seek the intervention of the National Assembly over the issue. “Let every states also look inward to build their tax bases. Lagos is viable today because successive administrations developed its human capital. Other states should follow suit. Every State has unique resources which gives them comparative advantage over others, so let’s harness what we have,”

He explained that there are States and countries without Oil and Gas but they are very viable because they maximize their human resources.

“For us as an institute, we shall continue to be at the vanguard of addressing all these fundamental issues. We shall be part of the solutions to the problems of Nigeria and reconfigure the nation on the right path without any form of sentiment, but focusing on the best thing to do for this nation.” He added.