EGYPT:Pics, One of Egypt's most arid governorates plans to be main producer of jojoba oil 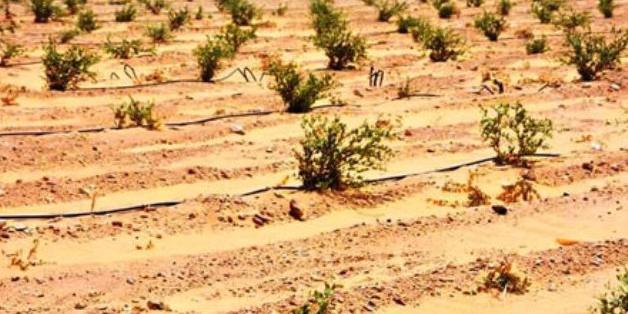 The Middle East largest jojoba greenhouse of 50 million seedlings ready for plantation has been established in the New Valley, a vast desert governorate in western Egypt.

Jojoba oil is used in high-quality industries, such as in the aircraft engine oils, biofuels, raw materials for clean industries, and expensive cosmetics, to name a few.  The total international trade of jojoba oil amounts to $30 billion annually.

In only a few years, the New Valley planted 15,000 jojoba trees. Paris Center, a company in the small city of Paris in the governorate, has 80 percent of the tress. In the first phase, Paris Center will cultivate 12,500 feddans to make jojoba oil for world class cosmetics and alternatives to bio-pesticides to produce organic crops from jojoba oil instead of carcinogenic chemical pesticides.

Solar energy stations and irrigation networks will be installed in the governorate to support the project, whose cost amounts to L.E. 750 million.

Jojoba is a desert plant that withstands temperatures from -5 to 50 degrees Celsius, high soil salinity. and high-water salinity. It also requires water sparsely.

Some 3,000 feddans in Farafra, an oasis in the New Valley, have been planted with medicinal and aromatic plants, including jojoba

Six million seedlings have been produced this year, and mother plants planted from the seeds have been selected and a farm was built for the mothers to preserve their qualities and multiply them. They will soon be planted in different deserts in Egypt to identify their productivity and strength in the harsh climate. Then, another selection of those mothers will take place.

The pulp of jojoba can be used in fodder and high-quality protein products as an alternative to soybean protein. Its seed husks and leaves can also be used in complementary industries.