Egypt is one of few countries that achieved positive economic growth during COVID-19 pandemic, UNDP Representative 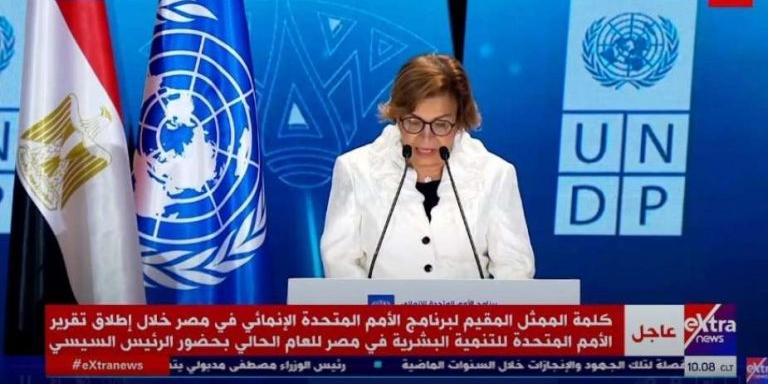 Egypt was one of the few countries that maintained positive economic growth rates during the coronavirus (COVID-19) pandemic, according to Randa Aboul-Hosn, United Nations Development Programme’s (UNDP) ResidentRepresentative in Egypt.

She said that the launch of the UNDP’s Human Development Report (HDR) in Egypt for 2021 confirmed its commitment to a development approach that puts the human being at the center of development. She added that the reforms pursued by Egypt in economic and social policies decisively addressed chronic development challenges.

Aboul-Hosn’s remarks came during her speech in the launch event of HDR in Egypt for 2021 in the presence of President Abdel-Fattah Al-Sisi.

She said that this report is the 12th report in a series of national human development reports issued on Egypt since 1994.

She added that this important report comes after a 10-year hiatus, to renew and confirm Egypt’s commitment to a development approach that puts the human being at the center of development, which is the approach to human development that was established by the United Nations International Development Report over the past 30 years.

Aboul-Hosn, pointed out that the report dealt with a pivotal period in Egypt’s modern history that began with the January 2011 and 2013 revolutions, followed by the adoption of a new constitution in 2014, and the subsequent important reforms in economic and social policies that decisively addressed chronic development challenges.

Aboul-Hosn stressed that the bold national reform program adopted by Egypt in 2016 succeeded in achieving macroeconomic stability and enhancing confidence in it, which saved Egypt from the disruption caused by the Corona pandemic in the year 2020 to the global economy, and it was one of the few countries that managed to maintain a positive pace of its economic growth.