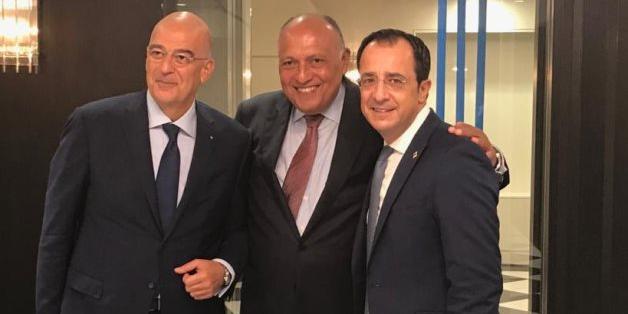 Continuing cooperation through the Trilateral Cooperation Mechanism, Egyptian Foreign Minister Sameh Shoukry met with the Cypriot and Greek counterparts Nikos Christodoulides and Nikos Dendias, respectively, to discuss promoting the cooperation among the three countries, and to coordinate regarding issues of common concern, said Egyptian Foreign Ministry Spokesperson Ahmed Hafez on Twitter on Thursday.
The tripartite meeting was held on the sidelines of the 76th session of the UN General Assembly (UNGA 76) in New York City.
On the same day, Shoukry met with Niger's counterpart Hassoumi Massoudou, discussing the aspects of bilateral relations between the two countries and the most important regional issues, said Egyptian Foreign Ministry Spokesperson Ahmed Hafez on his Twitter account.
Since his arrival to the New York City, Shoukry held  a series of meeting with his counterparts of different countries.