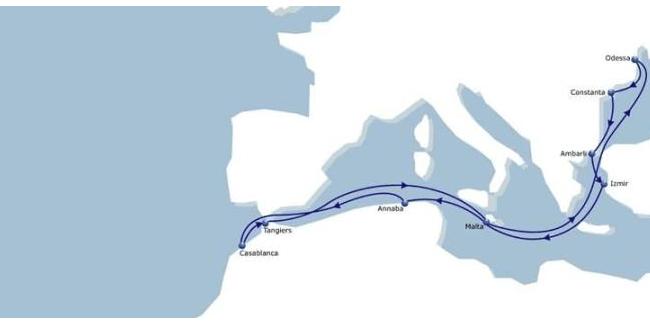 The world leader company in maritime transport, CMA CGM, is launching the Black Sea Med Express service, aiming at connecting the major countries around the Black Sea (Turkey, Romania and Ukraine) to Algeria and Morocco, the company said in a statement.

The CMA CGM Group is innovating and growing in the Mediterranean by launching Black Sea Med Express, created specifically to respond to boost trade between the Black Sea countries, Turkey, Algeria and Morocco.In this regard, CMA CGM offers some of the best transit times between: Ambarli (Turkey) is connected to Annaba (Algeria) in 6 days, Constanta to Casablanca (Morocco) in 16 days, Malta to Odessa (Ukraine) in 4 days and Izmir (Turkey) to Malta in 2 days, said the source.

A global service offering multiple service possibilities to the countries of Southern Eastern Europe, and transshipment to world markets.

The Black Sea Med Express service is expected to begin on August 21stin Malta, with a fleet of four vessels with a capacity of 1,700 TEU, which will operate in Casablanca, Tangier, Malta, Odessa, Constanta, Ambarli, Izmir, Malta and Annaba.

The implementation of the Black Sea Med Express service is directly in line with the CMA CGM Group’s strategy for the development of short lines in the Mediterranean and Black Sea.