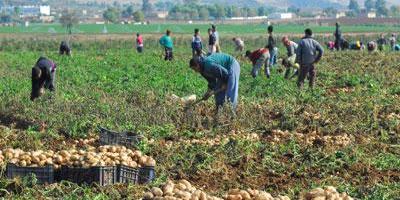 The Algerian Government’s Action Plan has placed the development of productive agricultural activities in a way that not only to strengthen the country’s food security, but also to diversify the national economy and reduce the imbalance in trade of the main agricultural products, APS reported on Sunday.

The Government’s Action Plan for implementation of the President’s program, which will be presented to the National People’s Assembly, next Tuesday, has identified several domains for achieving these objectives.

First, the extension of the irrigated area of ​​one million hectares, which will result from the valuation and consolidation of the existing potential over an area of ​​261,500 hectares, as well as creation of new areas of agricultural concessions with the actual development of 370,000 hectares, to which will be added new large irrigation schemes, totaling an area of ​​331,000 hectares.

The further development of Saharan agriculture through the creation of new development areas is also provided by in the Government’s Action Plan.

The other measures concern the strengthening of sanitary protection and the development of mechanization, as well as the resumption of fallow, which should eventually cover an area of ​​576,000 hectares, allocated for forage of legumes.

The development and use of seeds with high productive potential, as well as the development of the agro-food industry, are also planned in order to enhance agricultural production, particularly for certain speculations that have been shown to have proved to be growing (market gardening, including potatoes, Onion, white and red meats…) and to promote the export of agricultural products with comparative advantages.

It has also envisaged the development and use of seeds with high productive potential, as well as the development of the agro-food industry, in order to enhance agricultural production, especially for certain speculations, which experienced growth (market gardening including potatoes and onions, white and red meat…), and to promote the export of agricultural products with comparative advantages.

The Government has also undertaken to complete the investment programs, included in the extension of storage capacity, including those for refrigeration, which will be continued, as well as programs for modernization of processing and slaughter units.